When it comes to multitasking, sophomore journalism student Jacob Lauing takes the cake. On top of being an involved member of the Mustang Daily and a full-time Cal Poly student, Lauing participates in a successful Indie-Rock band with a friend from home.

Lauing’s band, The Wonderlife, originated when he was only 12 years old.

“It wasn’t too serious back then, just two guys playing acoustic music,” Lauing said. “We ended up going our separate ways and it wasn’t until last year that we kind of reconnected and decided to reform The Wonderlife.”

Just a few years ago, Lauing reunited with childhood friend Jake Vertin to pick up where they left off. Though the two attend schools in different countries, they dedicate time apart writing and perfecting their music so that they can come together at home to play and perform.

“My musical focus is strictly routed back home, so I’m not involved down here,” Lauing said. “I’m pretty busy, so any time I have to spend on music, I’m writing new material or preparing for whenever I see my bandmate next.

Though the separation can cause a strain in their music, Lauing finds Vertin extremely easy to work with and feels lucky to have him as a partner.

“We balance each other out perfectly, so I can’t really imagine working this extensively with anyone else,” Lauing said.

Though Lauing finds himself overwhelmed with such a demanding schedule, he always tries to incorporate music into his life in some way. When he is not playing at home with Vertin, Lauing is playing his guitar at school for sheer enjoyment.

(Photo courtesy of Lauing) “Music means a lot to me, it’s such a great emotional outlet. I can use it to escape from any problems I’m having, or just as a way to let loose,” Lauing said.

Lauing and Vertin have dedicated a large sum of time to advertising their music, from selling CD’s to endorsing themselves on social media. For the future, though Lauing doesn’t expect a career in music, he plans to keep playing for fun and see what opportunities are presented to him.

“Our plan is really just to keep producing music and keep improving. If the opportunity to make it more serious ever presented itself, that would be something I’m open to,” Lauing said. “For now, it’s really just something we love doing. I can’t see myself not making music on a daily basis.”

Lauing and Vertin have published their debut album on Spotify, iTunes, and BandCamp on top of selling physical CD copies. According to Lauing, the sales have been successful so far.

“So far the physical copies have been flying off the shelves so to speak, but BandCamp purchases have been up there and Spotify plays are high,” Lauing said.

No matter where the band takes them, Lauing  appreciates the opportunities he has been given and plans to work with Vertin for as long as he can. To him, Vertin contributes a great amount of expertise and brings their music to a new level.

“Jake is one of my best friends, he’s like a brother to me at this point,” Lauing said. “It’s cool being in a project with only one other guy, because we both have such a large say in the final product, and musically, it creates such an even split between our two influences.” 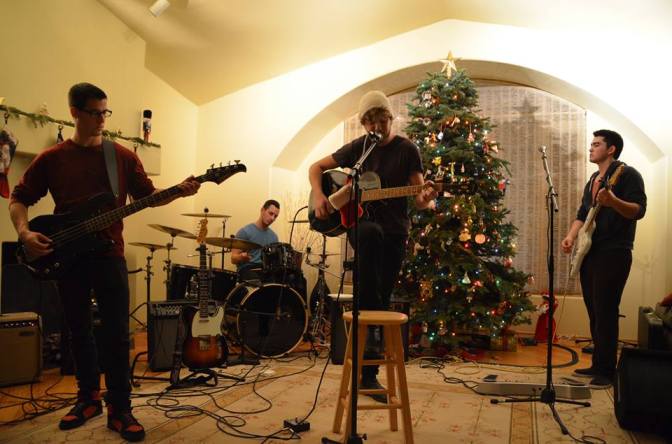 (Photo courtesy of Lauing) In one of many performances the band has done, Lauing and Vertin invited two old friends to join them in a show over Winter Break. After the show, which was well attended, the band sold CD’s and asked for additional donations for future productions.

Alternative rock is a subgenre of rock music which originated in the 1980’s and became immensely more popular by the 90’s. The genre is typically known for its distinction from mainstream rock music, and its tendency to have a distorted guitar sound, transgressive lyrics, and a defiant attitude.

For Cal Poly junior English student Shelby Fisher, alternative music is a large part of her life. After discovering the genre in high school, Fisher researched it and found some obscure artists that she grew to love.

“I like it because it can be both happy and serious,” Fisher said. “I like to sing along to it in the car or actually listen to it when I want to experience real music.”

Some of Fisher’s favorite alternative bands include:

Though Fisher has seen almost all of her favorite bands in concert, it is her goal to attend Warped Tour, which features a large variety of rock bands. She also aims to spread her love of alternative music to other people, as she insists that it contains positive messages that most people don’t recognize.

“People should listen to it because it’s truly good music,” Fisher said. “I think it has better messages than rap so it’s good for younger people and more mature people.

Metal, otherwise known as hard metal, developed in the late 60’s and became increasingly popular in both the United Kingdom and the United States. The genre contains roots in blues rock and psychedelic rock, and is widely known for its overall loudness, extended guitar solos, masculinity, and aggression.

“People always make fun of me for listening to metal,” Springer joked. “Honestly I grew up listening to it, and it has stuck with me ever since.

Springer acknowledges the stereotypes that come along with metal, and insists that the songs are actually put together in a very artistic manner.

“A lot of people hear it and only hear screaming or heavy drums,” Springer said. “When you actually start to listen to it more you realize that their voices are super pretty and the lyrics were actually well written.”

Some of Springers favorite artists, which are more obscure than mainstream ones, include:

Though Classic rock originally became popular in the late ‘60’s, it consistently attracts new generations of fans who appreciate the unique style of the music.

The genre contains a combination of hard rock, blues rock, and arena rock which were all popularized in the 70’s.

Sophomore biology student Shayan Lebastchi is one of several in our new generation who finds classic rock more appealing than current, popular music.

“There will always be a place in my life for old school, classic music,” Lebastchi said. “The music is so mellow and consistently has a strong melody to go along with that.”

Some popular bands that our generation listens to and collects CD’s and vinyls for include:

Warped tour has been labeled the ultimate rock experience. Originating in 1995, the tour has spread to locations across the US, as well as Europe, Canada, and Australia.

Though Warped Tour initially only featured rock music, it currently showcases artists in diverse genres. Some of these include:

The tour is traditionally sponsored by Vans, and is held in venues such as parking lots of fields where the stages are created. 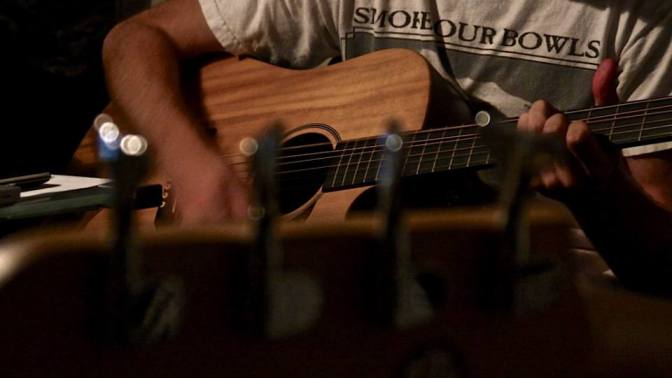 (Photo courtesy of Lauing) “Rock music is one genre that will never get old,” Lauing said. “I have been pleased to see a large presence of the genre not only at home, but at Cal Poly as well.”